A Dangerous Place to Be

It's getting worse. As if this is a secret nobody wants to talk about, like how Uncle Harry farts at the dinner table and thinks it goes unnoticed. Well the stench is permeating all that is good about downtown Portland, and somebody's pants are about to show the ugly truth.

Portland's downtown transit mall is a mess. It's an unruly and supremely dangerous place for anyone to be. Nobody will speak up about it. Except me. I've had enough, and it's time this debacle is dealt with.

A city government's job includes doing everything possible to ensure public safety. When it comes to downtown, nobody seems to care except transit workers. We've seen people injured and killed due to a shocking unwillingness to leave conditions as is. When accidents happen, the blame seems to be thrown upon US. Nobody takes responsibility for their own safety anymore. The status quo needs to go.

Nearly 40 bus, four light rail, two streetcar lines, Lift vans and thousands of other vehicles use Portland's Transit Mall every day. It was designed to avoid total chaos with all the transit traffic combined with private and commercial vehicles. Each line has specific stops to service, and transit workers do an admirable job working together to transport thousands of commuters daily. But it's not easy, nor is it a safe environment for traffic or pedestrians. And it's getting worse.

From what I've been told, local leaders decided long ago it wasn't in the city's best interests to enforce traffic code on the mall. They didn't want to scare away tourists by enforcing laws written with the express reason of keeping people safe. This is ridiculous, but from all accounts I've heard, it's true. As a result, motorists brazenly defy signs prohibiting use of transit lanes, ignore "NO TURNS" signs and have a flippant attitude about doing it.

"Cops aren't going to write me a ticket anyway, so fuck off driver," one particularly aggressive motorist yelled at me one day. Sadly, I couldn't disagree with the first part of his statement. The expletive insult I could have done without.

Tourists are simply baffled as to how they should behave on 5th and 6th Avenues. The signage is horrible; they're so small they seem like polite suggestions rather than legal statements. Street markings are all but worn away in some areas.

If motorists aren't just waiting to make an illegal right turn behind a bus which is servicing a stop, they're swerving around and cutting in front of buses attempting to continue in service. Often, they display their driving IQ in an not-so-friendly salute out the window as they go by. Cars routinely run red lights on cross streets, making our light rail operators sweat bullets at every intersection. Transit workers are highly-trained and always on the alert for boneheads in traffic; motorists are either in a hurry to get nowhere fast, supremely arrogant and ignorant, or blithely unaware of their poor driving habits inviting disaster.

Pedestrians are too busy staring at their phones to look up and see the DON'T WALK signals. Some just don't care. I've had to brake hard to avoid hitting people who wander idly into the bus lanes, halfway between intersections, while checking their FaceBook or Twitter feeds. Then they yell at us for giving the customary "beep beep" of our warning device (aka 'horn'), or throw that one-fingered salute we so love to see. I don't truly mind that. Transit operators believe that if we don't see that finger at least once a day, we're not doing our job. I'd rather be flipped off than to have Joe Schmoe flipped under my bus.

Look as far as you can up either street, and there are no cops. Their downtown headquarters is within walking distance of the mall, but rarely are cruisers on patrol there unless they're en route to some waiting catastrophe. But hey, I don't blame our brothers and sisters in law enforcement for their conspicuous absence. It's their bosses' bosses who are solely to blame for this terrible lack of enforcement. City leaders bemoan budget deficits and warn of impending cuts instead of additions to an overworked police bureau.  There simply isn't enough money, they cry, to keep the city safe.

Try this: start regularly patrolling the mall. Design and print brochures explaining basic laws and procedures for downtown driving, and distribute them to info centers, hotels, malls. Do some public service announcements showing how we all need to be more safe and follow the laws so people aren't hurt. Re-design the transit mall and be creative about it. White markings are mere suggestions; make yellow double lines separating regular from transit traffic, install flashing signs (light rail designers had the foresight to do that right) as warnings. Try something innovative: install solar roadway tiles in some areas which would light up as signage, warm streets during icy weather, and eliminate bone-jarring potholes that grace nearly every block.

Transit operators and supervisors provide this city with an invaluable service, by transporting its workforce. The downtown transit mall is a vital piece of the system. When it works (usually early Sunday morning when Portlanders are sleeping off the latest beer festival), the mall is a wonderfully efficient engineering marvel. When it doesn't, people die. They step off the curb in front of 100,000 lb. light rail vehicles and end up underneath. Motorists cut off buses and find out what 40,000 lb. vehicles can do to a BMW's paint job. Bicyclists weave in and out of traffic, playing chicken with all traffic, and blame the driver if something goes wrong.

It's a mad world out there. But I'm madder. If the City of Portland truly cares about all who live or visit here, they'll find a way. Hey, if they'd just enforce the law and fine offenders, it could probably pay for enough officers to regularly patrol the mall. If TriMet truly believed "Safety is Our Core Value", it would push city leaders to action on this matter. Instead of pussyfooting around and whining about not wanting to offend people, take a stand and insist that obeying laws is vital to assure public safety. In a city this beautiful, boasting one of the finest transit systems in the world and a spectacular new transit-only bridge, it's perplexing to have such a dangerous downtown transit mall.

In the meantime, please take your eyes off your phone and pay attention whenever you're on the move. Your life and your fellow Portlanders depend on it. Pokemon can Go to hell, but you only have one body on this Earth. 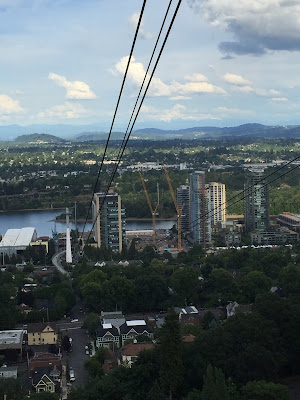