Once again, one of our operators was attacked while de-boarding a woman described as "crazy". Apparently unprovoked, she punched, pulled the hair and scratched a driver's eye.

Crazy Rider has reportedly done this before. The road supe said she'd hit him recently and the police had arrested her five times in the past month! As for our victim operator, she reportedly continued on route. I wish she'd been removed from duty and transported for medical care, for her sake. It is a common mistake for injured people to bravely decline medical treatment. I truly hope she's okay.

This MUST be dealt with. But how?

Operating a bus is much more than it appears. We're tasked with taking fare and dispensing receipts, keeping watch over our passengers for their own safety, in addition to keeping those around our bus safe. As for me, I don't care whether someone shows me a lottery ticket or a bus pass when they board. I'm a fare informer, not a fare inspector. In fact, I'm told that breed of district employee is extinct. Since the position was eliminated by our unwise district management, I have not had a single authority figure check fares on my bus. Not once in over a year. If I give, on average, over 300 people a ride each day, then about 70,000 people have ridden my bus in that time period. Given the propensity for some people to cheat the system, you can bet at least 1,000 (or more) have shown me expired or otherwise invalid fare.

I don't care, either. Since I began driving a bus, several of my brothers and sisters have been attacked. Some have been critically injured. Do I think a simple bus fare is worth arguing over? Absofreakinlutely not. This latest attack on a sister, however, was reportedly unprovoked. Evidently, the passenger (I hesitate to use a more profane descriptor) was deboarding when she turned around and attacked the operator.

Luckily, I have never been attacked. Some people I know, not so lucky. How would I act? Male bravado dictates I'd open a 5,000 gallon barrel of whupass on the freak. I'm not so sure how I could do that while facing a knife, gun, brass knuckles or any other weapon. Chances are good the attacker would strike when I'm least prepared to defend myself. District operating procedures dictate we not leave the seat during an "incident". I suppose it's better for them if we're sitting ducks. Public punching bags. Fist targets. Spit receptors. Hair donators. Blood donors.

Which leads me to the disgust I feel for the district's inaction when it comes to driver attacks. Sure, the media relations people spout off about how they're "very concerned with the operator's well being, and are conducting a thorough investigation". Usually, it seems they're investigating us rather than Joe Scumbag. When our sister Pamela was brutally attacked last December, my fellow ATU757 members were at the court hearings to support her. Where was anybody from the district? Nowhere to be seen. On my day off, Christmas Eve, I dressed up in my uniform blues and drove downtown with many of our fellow brothers and sisters to stand beside Pam in court as she faced her attacker. Where was our GM? Probably drinking eggnog and admiring his new light rail bridge. While they may wax eloquent to the press, mouthing "outrage" without actually expressing it, they let us down when it comes to enforcing our safety.

Evidently, it's a minor felony to assault a transit worker on the job. The district offers a piddly $1,000 for "information leading to the arrest" of suspects accused of assaulting us. It should be more like $10,000, and then perhaps people would pay closer attention. There should be an automatic jail term of at least 60 days for the guilty one, permanent exclusion from using public transportation, and lengthy probation and counseling. The district has repeatedly been asked to display photo posters of those excluded or charged with assaulting us. The most normal in appearance could be driver beaters in disguise.

If someone were to assault me, resulting in my beating the living shit out the attacker, the tables would turn. The media would headline "Bus Driver Assaults Innocent Rider". I could be fired, arrested, and sued in civil court. Except for union representatives at my side, I'd be alone, having to prove my innocence rather than the district backing me up. The "outrage" would be turned toward me, not my attacker.

Yes, we're very angry right now. The district is disrespectful of us, misrepresents our contract philosophy, and works harder to terminate than protect the very people who diligently make the wheels roll. They hire more managers while eliminating vital operations positions.

It's a dangerous job. We don't "just drive a bus", as Lars is want to say. It's brutally hard work, and deserves the community's utmost dignity and respect. We save lives, deliver people safely to their destinations, and show acts of kindness thousands of times each day. Yet out of 100 calls to customer service, it's estimated that less than five are complimentary.

I don't want a cage around me while I drive. Most riders are friendly, polite and respectful. They thank me for the ride, and wish me safety throughout my shift. I love 95% of the people who ride, and I don't want to be shielded from kindness. I just want to feel as if my safety actually means something to those whose salary is quadruple mine. And, I want to feel as if district management has my back, rather than being poised to kick my backside.

My hat is off to the Line 9 driver today. May you heal wholly, both physically and spiritually, from this horrible attack.

Peace be with you all.
DiB

- September 20, 2014 13 comments:
Email ThisBlogThis!Share to TwitterShare to FacebookShare to Pinterest

The Deacon has been leaving these in random spots around Portland! 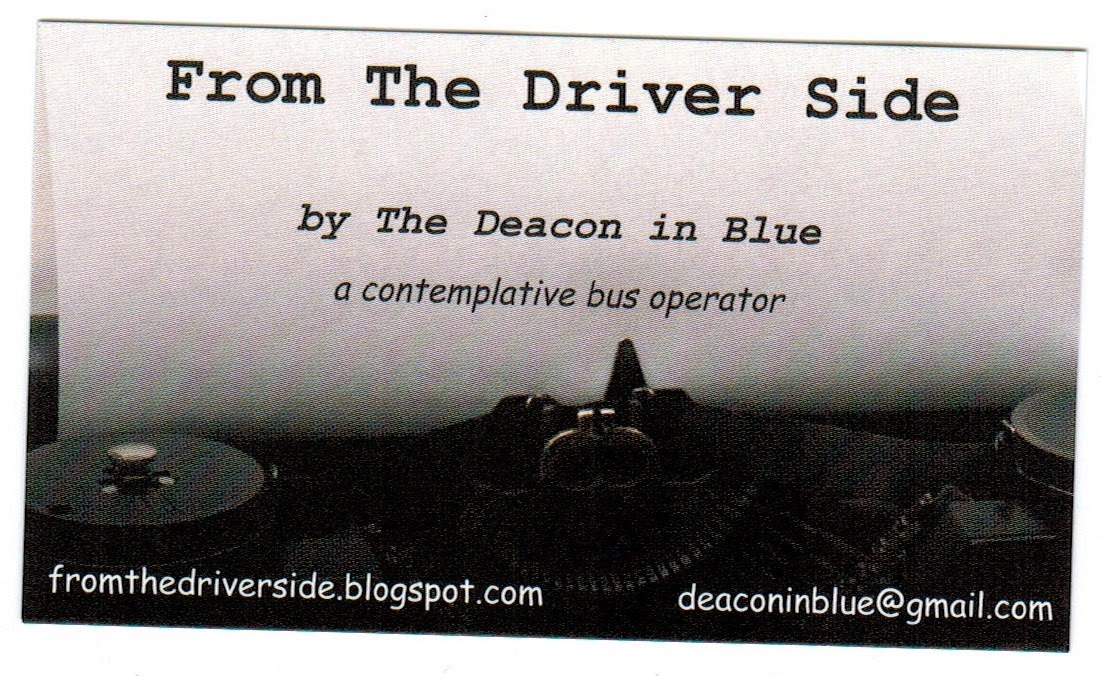 You just never know where you'll find one... please share it when you do.

Hint: I lurk in bookstores quite often. You'll find them in some of my favorite books.

- September 18, 2014 No comments:
Email ThisBlogThis!Share to TwitterShare to FacebookShare to Pinterest

Mike Luce created TEST (Transit Employee Support Team) to help transit employees who are either injured or fighting a disease, and are unable to work. Spending thousands of dollars of his own money, he made his vision into reality in the form of a non-profit organization. Affiliated with United Way, TEST offers local transit employees the chance to contribute via paycheck deduction or cash donations. It has also partnered with Fred Meyer and other businesses so that a portion of each purchase by a registered participant goes to TEST.

In the past year, its notable achievements include providing financial support to a few of our own operators battling life-threatening diseases. It has also helped another who is recovering from injuries sustained in a horrible motorcycle accident last winter.

While TEST focuses on Portland transit employees, anybody can donate. We've had drivers stabbed, beat up and even threatened at gunpoint the past few years. These incidents are quite traumatic, often physically debilitating, for the victims. It is refreshing to know there is a group created by, and for the benefit of, Portland transit workers.

This is certainly worthwhile. Who among us hasn't asked "What if" when driving people of unknown emotional states? I shudder at the thought of my family trying to make ends meet if something catastrophic happened to me. So little as it may be, I am setting up a payroll deduction contribution.

The other day, I was speaking with a nice gentleman who happened to be standing with the younger Michael. We were discussing TEST, and he asked what I knew of it.

"Well," I stammered, quite off-guard, "not much except it was started by Mike Luce, Sr. and it's designed to help employees in need."

Having seen the cool hats sporting the TEST logo, the ads on some of our buses, and talk around the bullpen, I had made a "note to self" to find out more. Eventually. You know how that goes... life gets in the way and six months blow by. A minute later, Mike's son reminded his father he needed to get to his road relief, and realization struck me like a bus wheel bouncing off a streetcar platform. This guy was Michael's father! Another note to self: DUH.

While it was a tad embarassing, it was nice to meet this man whose dream has helped  his fellow operators in need.

Thanks Mike, for dedicating a large portion of your savings to creating this wonderful organization. May more of us donate with the same spirit of comradery, so that your devotion pays homage to the fact we are all family.
******************************
For more information, please visit www.ourtest.org, and like the TEST FaceBook page.
- September 05, 2014 No comments:
Email ThisBlogThis!Share to TwitterShare to FacebookShare to Pinterest
Newer Posts Older Posts Home
Subscribe to: Posts (Atom)