Revisiting a recurring theme: traffic violators. The city is loathe to cite drivers for blatant traffic violations on our transit mall, one of the most dangerous places to walk, ride or drive in our city. Why? From what I've been able to find out, because they don't want to scare off tourists.

This laissez-faire attitude emboldens local drivers to dangerously foolish stunts we constantly see downtown. Vehicles with Oregon and Washington license plates are the most blatant offenders, and they should know better. Yet rarely do we see any police cruisers patrolling the mall for traffic, or pedestrian, or bicycle offenses. It's a scary practice that tells people "Just do what you want, we don't care!" rather than "We care about your safety, and we'll cite you for breaking the law". Why is Portland so cowardly when it comes to enforcing the law? You don't want to scare tourists away?!? I'm sorry, but when you're driving anywhere you should obey traffic signs. After all, isn't "BUS ONLY" spelled the same in all English-speaking vicinities?

One rush hour evening as I was pulling from a service stop on the mall, an impatient driver in the auto lane pulled into the bus lane, blocking my exit as the light turned green. I honked at him (our agency says to only use a "polite beep-beep"), but his response was to give me the finger as he made an illegal right turn directly in front of my bus. There was a cop in the auto lane, and I looked back at him over my shoulder, with a "what the hell?" expression. He must have felt duty-bound, because he flipped on his lights and pulled the violator over. It was the only time I've seen this happen in my entire career, and I drive on the mall daily! It was so wonderful to see that I was tempted to lock up the bus, walk over to the cars and applaud the officer. Stunts like that however, are only fantasies in a bus operator's mind.

Then you have the motorists who are so impatient, they must get around you so they can be the first to stop at that red light. When I'm leaving a service stop, I note how many cars are approaching and how far away they are before I can safely re-enter traffic. If there's a bus pull-out at the stop, I'm less likely to get a friendly (and legal) pass. Usually, three or more cars will speed up to try and block my lumbering beast. It's sadly amusing when a "smart" car tries to bully me. Any electric vehicle driver seems to think they're entitled to the road because they're "clean". I'm sorry, but even a clean-emissions car doesn't trump the 50 vehicles my passengers have left at home to take public transportation. Our newer buses are extremely emission-friendly these days, so the people riding my bus have effectively a smaller carbon footprint than Mr. SmartyPants Prius Driver.

So yeah, now I'm bashing people who refuse to Obey the Yield. Oregon traffic law requires vehicles to yield to transit vehicles with the "yield" light activated.  Most people, when confronted with this fact, just submit their one-fingered IQ salute and motor on past. Some are lucky, but a few learn the hard way... BUMP! CRASH! BANG! Then sirens follow. But I digress. We've covered this before, doggone it Deacon.


One evening last week as I became frustrated at the umpteenth time a motorist had sped up rather than yielding, I cursed. Yep, I called that sorry pile of dung a dirty name. Under my breath, or so I thought. Some passengers can hear a mouse fart miles away. Oops. Luckily for me, Perry Passenger suggested an innovative idea: cameras on back of buses to bust people out of the habit. What, won't yield, eh? Have a look at your mail in a week or so buddy, and you'll get an expensive lesson in road manners. Hey, if school buses can do it, why can't we? School Buses...SNAP! This could net thousands of dollars a week. I've asked several officers if they've ever ticketed a motorist for this offense, and only one has answered in the affirmative. 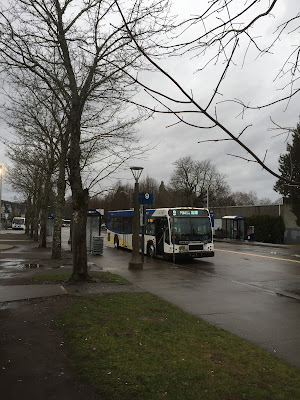 Over the next 20 years, Portland is expected to pick up nearly a million new residents. Unless we crack down on traffic violations, fix our roads, expand/repair freeways and bridges and keep updating public transit, we're doomed to constant gridlock. Unfortunately, I don't hear much foresight from city planners, other than how to shove light rail down a municipal throat that's already coughing up bile from the recent $1.5 billion dollars spent on a seven-mile light rail project.

I thought Portland was innovative, but lately I'm thinking not so much. You want innovative? Try something like this on our transit mall. Lead the way Portland, or we'll be too far behind soon and unable to catch up.
- February 13, 2016 3 comments:
Email ThisBlogThis!Share to TwitterShare to FacebookShare to Pinterest
Newer Posts Older Posts Home
Subscribe to: Posts (Atom)