Management assured us that turning on the microphones and expanding the camera view on the operator's seat would not lead to spying. They promised that when investigating an incident or complaint, the scrutiny would be only on the time of the incident.

They asked us to trust them. We did.

I heard an operator say he was recently called in to speak with a manager about a complaint, and the meeting devolved into other times in his shift during which he supposedly did something wrong. Five day suspension.

"I had to drive Uber to make up for the loss in pay," he said, shaking his head.

This isn't the first time I've heard such a tale. Maybe management has forgotten its promises. We have not.

In addition, I also learned those tasked with reviewing data pack information were caught at Center Garage spying on operators outside of the agreed timelines. Somebody complained. Soon after, the staff was moved to a location where its activity could not be so easily witnessed. Management has proven once again, it will do what it wants to the detriment of its most valuable employees, without fear of reprisal. It simply cannot be trusted to do the honorable thing.

Morale is at an all-time low. Those who run our transit agency have NO oversight. They change Standard Operating Procedures on a whim, and seem hell-bent on suspending and firing honored veterans. Rather than respectfully supporting those who make their own jobs possible, their actions are confusing at best, nefarious and injurious at worst.

Those responsible for these severe indignities should be punished. We consistently exceed impossibly high standards, while those whose main goal should be supportive in nature, are allowed to run roughshod over us.

This behavior must stop.

If we had the right to strike, these injustices would slither into the Willamette River with the remainder of Portland's dirtiest mistakes. We should all petition the Oregon Legislature to restore our legal right to strike. This is mine.

We have had several administrations whose actions have wounded a devoted family of professionals. It's time for our family to rise up against this mountain of injustice and eradicate it forever. Only then is it possible to regain the heights of acclimation our system once earned around the globe.

Once again, I refuse to accept the false show of "support" on Transit Worker Appreciation Day '21. To allow management's phony declaration of admiration would be a grave error of weakness. We must unite  for the noble sake of our collective honor. We have a tradition of over 100 years of service behind us; they have 50 years of constant blunder and plunder.

Management and the Board stubbornly refuse to bend in appreciation during contract negotiations. Given our Herculean efforts and sacrifice over the past year of pandemic, fire and ice; any attempt to placate us with candies, fruit and broken trust highlights its utter contempt for those who make transit work.

We cannot trust them to suddenly change for the better. They have shown their hand plainly, with too many slaps in our collective face. It is time we become the change we need. 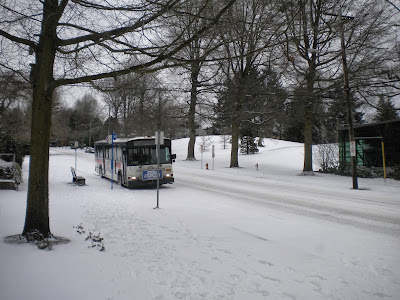 - February 25, 2021
Email ThisBlogThis!Share to TwitterShare to FacebookShare to Pinterest