Deke's Note: I'm on VAY-CAY-SHUN baby! It's a wondrous state of being, not having to work yet still being paid. Even so, I keep my hand on the pulse of my brothers and sisters of transit. Amalgamated Transit Union International's Communications Director recently asked on FaceBook what it's like to drive during the pandemic. Compared to normal operations, I can only muster one word: hell.

We have heard all this blathering nonsense about "Heroes Work Here" since the beginning of it all. Still, none of US are treated with any more (often less) respect than before. It's a catchy slogan, one meant to instill comraderie amongst those who depend on us and those who manage us. To say such a thing is surely meant as a means of showing respect, but it falls much shorter than that.

Transit workers endure every freak of nature fastball hurled our way. Each time, those entrusted with our safety are quick to say the right things while doing us vast wrongs. The hardened transit operator is inundated with falsities at every turn on a curb. The media is trained to record what they say, but fall very short of what they mean. The meaning is clear: we are expected to show up no matter what, and perform safely every roll of the wheel. The public perception is that we are widely appreciated; the reality is that we're treated exactly the opposite.

Take for example, Portland transit's contract negotiations as I write this. It surely has taken a hit given the horrendous drop in ridership this year, not even half what it was this time in '19. Even so, it received a $185 million bonus from the federal government. Perhaps not enough to cover its losses, but it has been whining about dwindling revenues for decades. Still, it pushed through a MAX line extension to Milwaukie during a recession, after substantially raising fares on a public still reeling from its effects of '08-'10. It failed to fully-fund the retirement pension promised three decades ago when union members agreed to paid healthcare in lieu of large wage increases. "Leadership" secretly snuck through a wage increase for non-union employees about five years ago, and the "Bored" of Directors blithely allowed it to pass without as much as raising an eyebrow. Three years ago, the GM acquiesced on union demands for wage increases as he eased into his Golden Retirement package, worth much more than I make in two years as this job takes a horrid toll upon my body and exposes me to any number of COVID-positive passengers.

Today, our management is deadlocked with our union over a contract that expired last December. When it did, they automatically passed along a 300% insurance premium increase to union workers, only because it could. There was no pandemic then, our ridership was on the increase, and we still provided excellent and safe rides for our fellow Portlanders.

They loudly proclaim us "heroes". Ha! You could fool me. We're not allowed to enforce the mask rule, even though our Governor has mandated it for the entire state as we fight to keep our fellow citizens safe. We cannot refuse service to someone who will not wear a mask or even observe the new Yellow-Line rule placing them almost six-feet away from our seat. If we call a passenger out for not wearing a mask and they say they "have a medical condition", they call in a complaint against us and we're called on the carpet to explain why we insisted they wear a mask. It's a two-way street; I wear a mask (and have since February, long before they were mandated on transit) to protect my passengers, and expect them to wear one to protect ME (on a bus for 10 hours each day) and their fellow riders.

There's no bite in anything, until the teeth sink into MY ass. I have nowhere to complain about rude, ignorant and uncaring people who assail and often assault us as we do our damndest to provide what we do and always have: a safe, smooth ride for a mere $2.50. How does that make me feel? Marginalized, at best. Insulted to the core, and about as valuable as the slug I stepped on as I swept my porch this evening.

Ahh, vacation. So sweet as I said. I will cherish it to the last moment before I step back into my torture chamber for which I'm paid less each minute my aging body can endure it. The media refuses to raise its once-mighty fist to document abuses of blue-collar workers, unions have been hamstrung by Oregon's disgusting law preventing us to strike, and the public thanks us but has no idea what we face "out there".

So, have I accurately described what it feels like to work during COVID-19? Not even close. Here it is: 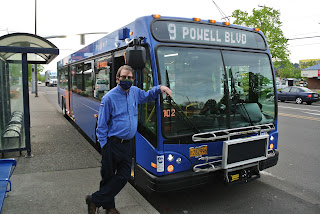 Yeah, that just about covers it. Perhaps I have forgotten a few points, but this is what came out. Even sitting here on vacation, I cannot rest assured. Perhaps some non-mask-wearing dumbfuck infected me a week ago and it just hasn't hit me yet.

A close friend of mine, his wife of nearly 30 years and their 20-something son are all suffering the COVID right now. Pat's a postal worker, and he may have infected them or vice versa. No matter: they're ALL sick. Pat's wife was transported to the hospital yesterday, and I pray for her safety as well as her husband's and son's. By now, many of us have similar, or worse, stories of virus-related tragedy.

Nobody is safe. We either muster the strength as a species to defeat this tiny assassin, or we all succumb to a growing dumbfuckery to the infinite degree. I don't plan on dying soon, but none of us know when it'll happen. No matter. I'll pray for your safety and keep wearing the face cover.

I refuse to be a maskhole. Be safe, folks.

- October 08, 2020
Email ThisBlogThis!Share to TwitterShare to FacebookShare to Pinterest